Paintings of the Six days of Creation

I more recently (November 2021) painted the seventh day. The seventh day was a challenge.  How do you show God resting?  :-)  I decided to go with a painting that shows God sustaining and upholding the Universe in His hands. God ceased from *creating*, but He didn't cease His constant and gracious care of His Creation. The following two passages point to this constant care:

Heb. 1:1-4 -- 1God, who at various times and in various ways spoke in time past to the fathers by the prophets, 2has in these last days spoken to us by His Son, whom He has appointed heir of all things, through whom also He made the worlds; 3who being the brightness of His glory and the express image of His person, and upholding all things by the word of His power, when He had by Himself purged our sins, sat down at the right hand of the Majesty on high, 4having become so much better than the angels, as He has by inheritance obtained a more excellent name than they.

Col. 1:15-18 -- 15He is the image of the invisible God, the firstborn over all creation. 16For by Him all things were created that are in heaven and that are on earth, visible and invisible, whether thrones or dominions or principalities or powers. All things were created through Him and for Him. 17And He is before all things, and in Him all things consist. 18And He is the head of the body, the church, who is the beginning, the firstborn from the dead, that in all things He may have the preeminence.

The paintings are shown below...

Gen. 1: 1-5 --
1In the beginning God created the heavens and the earth.
2The earth was without form, and void; and darkness was on the face of the deep. And the Spirit of God was hovering over the face of the waters.

3Then God said, “Let there be light”; and there was light. 4And God saw the light, that it was good; and God divided the light from the darkness. 5God called the light Day, and the darkness He called Night. So the evening and the morning were the first day. 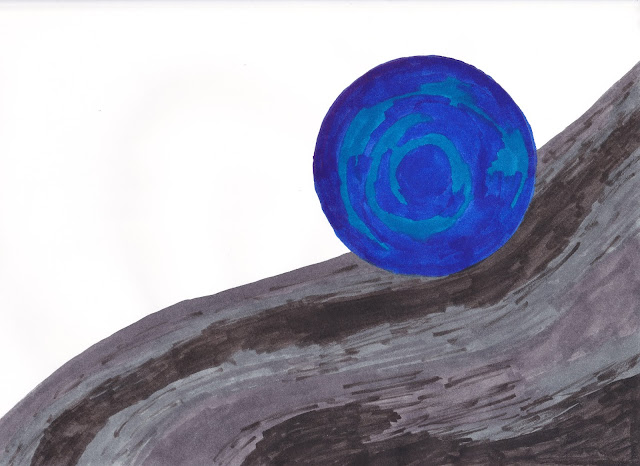 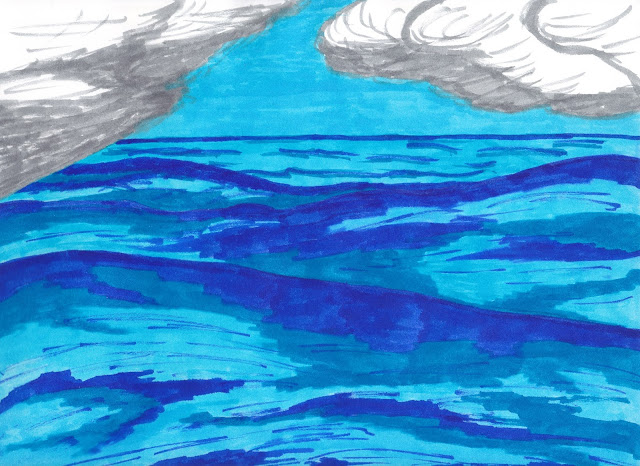 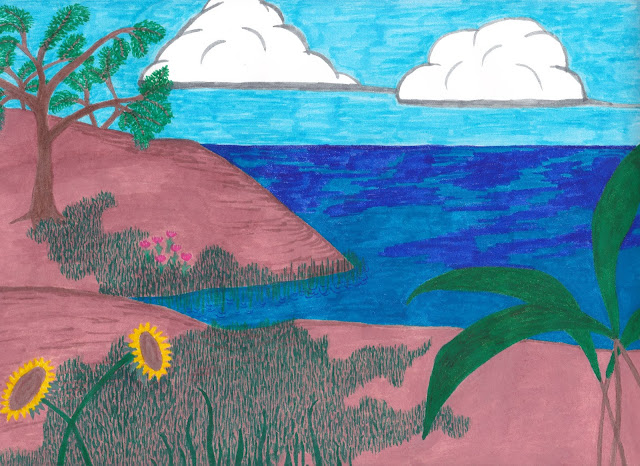 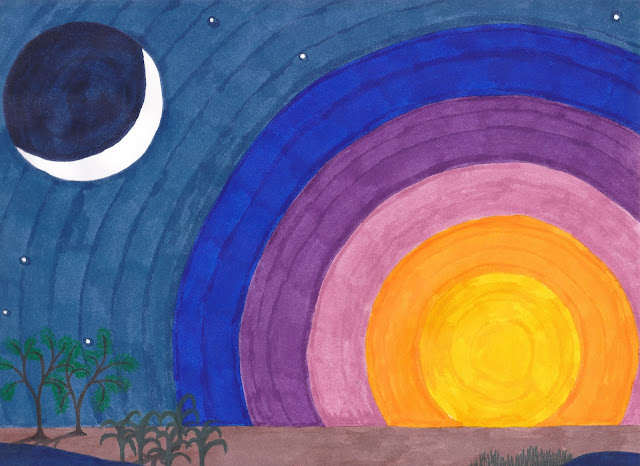 Gen 1:20-23
20Then God said, “Let the waters abound with an abundance of living creatures, and let birds fly above the earth across the face of the firmament of the heavens.” 21So God created great sea creatures and every living thing that moves, with which the waters abounded, according to their kind, and every winged bird according to its kind. And God saw that it was good. 22And God blessed them, saying, “Be fruitful and multiply, and fill the waters in the seas, and let birds multiply on the earth.” 23So the evening and the morning were the fifth day. 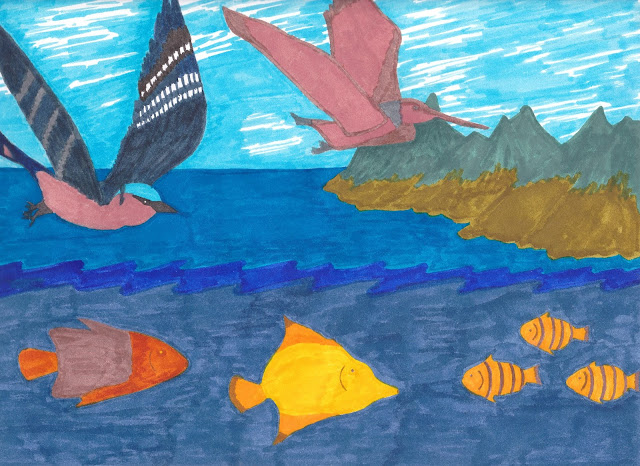 29And God said, “See, I have given you every herb that yields seed which is on the face of all the earth, and every tree whose fruit yields seed; to you it shall be for food. 30Also, to every beast of the earth, to every bird of the air, and to everything that creeps on the earth, in which there is life, I have given every green herb for food”; and it was so. 31Then God saw everything that He had made, and indeed it was very good. So the evening and the morning were the sixth day. 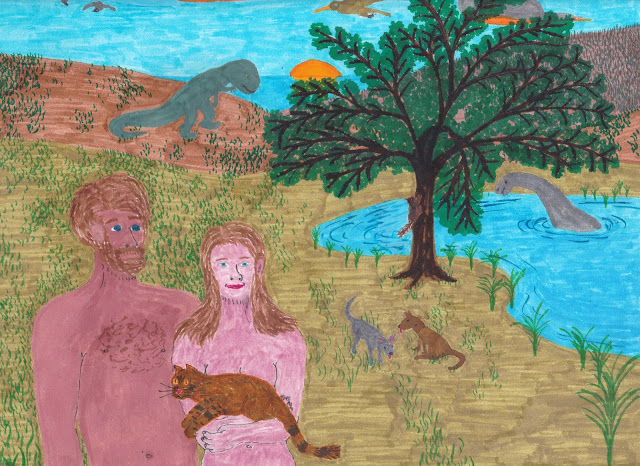 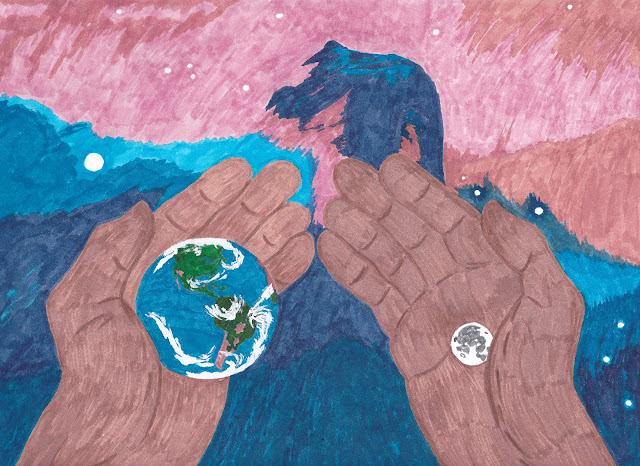 Some Implicatons of the Discovery of Gravity Waves

It appears that scientists have actually detected the long-sought gravity waves predicted by Einstein's General Theory of Relativity.  This discovery may have very interesting implications for the Biblical statement that God stretched out the heavens like a curtain (or tent)!  (See Psa. 104:2 and Isa. 40:22)


The LIGO site is here:


An interesting article regarding this discovery is here, at the ICR site:


Here are some quotes from the above ICR article:


"...The gravitational waves from the cataclysmic final merger of GW150914 (a binary black hole) reached Earth, after traveling over a billion light-years, as a ripple in space-time that changed the length of the 4-km LIGO (Laser Interferometer Gravitational-Wave Observatory) arm by only one ten-thousandth the width of a proton—proportionally
equivalent to changing the distance from our solar system to the nearest star by one hair’s width. This is the measurement problem that LIGO faced and solved on September 15,
2015, when black holes having solar masses of 36 and 29 were observed merging into a black hole with a solar mass of 62 at an approximate spatial distance of 1.3 billion
light-years. This ultra-precise measurement marked a phenomenal scientific achievement."

"How can gravitational waves transport massive amounts of energy through an apparent vacuum? In the biblical record, the Lord declared He stretched out the heavens like a curtain. Does this indicate that the apparent vacuum of outer space actually has a structure, fabric, or field we have yet to discover—that even empty space is “something” rather than “nothing”? Does the space-time continuum provide a transport mechanism for the natural phenomena we observe such as gravitational waves? This recent scientific discovery seems to confirm the Bible’s implication that space is a real entity with measurable properties."

It will be interesting to see how future discoveries shed light on this possibility.

Is the Higgs Boson Really the "God Particle"?

Scientists from Europe's CERN research center presented evidence in early July for a particle that is probably the Higgs boson, the last remaining elementary particle predicted by the Standard Model of particle physics.  In the Standard Model, particles have mass due to their interaction with the Higgs field.  The Higgs Boson is the basic particle which is associated with this field.

Although this Higgs Boson has been nicknamed the "God particle," it is widely agreed that the name is more for publicity than accuracy, and many physicists do not like the name.

Even if this discovery is eventually confirmed, and the Higgs Boson becomes an official member of the particles that are predicted by the Standard Model, do those of us who believe that God himself is the Creator need to regard the Higgs Boson as a challenge to our belief?

God the Creator, in the person of Jesus, created everything, including the Higgs Boson.

If you would like to read more about the details regarding the Higgs Boson, I recommend a few of these resources:

This is a No-Brainer!

The Institute for Creation Research has a great article about a fossilized whale brain which is challenging a lot of evolutionary assumptions.  This kind of fossil most likely could not possibly form or survive over long periods of time.  It certainly argues for a recent, world-wide flood.
Posted by Jim Link at 1/27/2012 04:21:00 PM No comments:

The Institute for Creation Research is knocking the ball out of the ballpark these days with some outstanding articles!  Check out these very recent additions:

Laetoli Footprints Out of Step with Evolution

Everyone will tell you that radioactive decay rates are fixed.  Everyone is wrong.

The Institute for Creation Research has published an article that discusses recent research which indicates that radioactive decay rates are, in fact, variable.  This situation seriously brings into question the age calculations of many scientists.  Read the ICR's article here.
Posted by Jim Link at 8/07/2011 09:52:00 PM 1 comment:

Some recent articles at the Institute for Creation Research website have pointed out how unlikely it is for soft animal or plant tissue to survive for extended periods of time in fossil sediments.  I think all three of these articles are well worth spending some time considering.

The first article is about Dinosaur Peptides and how a study of dinosaur soft tissue was both flawed and failed a peer review.

The second article is about how Green Fossil Leaves point to a recent catastrophe.

The third article is about how Fossil Feather Pigments are a problem for evolutionists.

There is a great article at the Institute for Creation Research's site from last month.  It highlights the incredible complexity of life structures such as compound eyes, and how unlikely it is that such structures arose by natural selection and evolution.